Why Preaching Is Like Jumping Off A Cliff With No Parachute

There is only a handful of things that I enjoy (and fear) more than preaching. You have probably heard that the best place to be is in the center of God’s will. When I preach, I cannot describe it as anything else but that. I am not deserving of this calling. Every single time I get up to preach, I feel absolutely helpless and useless. 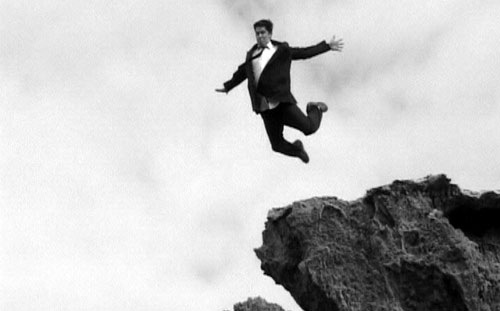 This is because I know my words do not have any power. It is only the powerful grace of God that takes my vain words and turns them into gospel bombs. In turn, hard hearts are shattered, repentance is initiated and Jesus’ cross is believed upon. God takes an incompetent and broken vessel — so that — through such ordinary means — His extraordinary plan of salvation would begin in the life of the listener.

In his second letter, Paul tells young Timothy to preach the word in season and out of season (2 Tim. 4:2). These were the words that met my wife and I when we visited the admission office of the first seminary that I attended. These words have been a banner under which I have functioned for probably the last decade of my life.

These words carry with them a sense of urgency, preparedness and readiness. These words were used of a soldier who prepared to go into battle or a guard who was perpetually alert for any surprise attack. These positions are imperatives for anyone wanting to preach faithfully and finish victoriously. These words of admonition relay a sense of readiness that needs to be adhered to regardless of circumstance. I believe this verse and this passage includes and extends well beyond the confines of a pulpit on any given Sunday.

One of my seminary professors always said the following phrase to a bunch of us who thought we could change a church in one sermon series. This phrase had to do with our readiness to preach. He said this:

When you are scheduled to preach, you do not call in sick — you crawl in sick.

This has literally been my mantra for the past decade.

On occasion, I have acquired an illness that required a prescription at worst and over the counter cold medicine at best. I have never ever not preached because I was sick — even though I might have been feeling under the weather.

Here is the crazy thing: I have felt sick while driving to church. I have felt sick when I am singing a worship song prior to me preaching. I have felt sick after I have preached. I have never in my entire life felt even a little bit sick or fatigued during the actual time when I was expositing the word of God for the people of God by the grace of God. I believe that the grace of God is so sufficient — and God is so merciful — that He provides special grace to those doing His work — at the time they most need it — so that His name could be glorified — and so that His power is made perfect in my weakness (2 Cor. 12:9). In fact, this is a cause for boasting in the Lord — so that the power of Christ may rest upon me (2 Cor. 12:10).

Let me share with you a quick story: This past Christmas, my wife and I had a chance to visit our family who lives in Seattle. During that time, I was scheduled to do a live stream event where I would be answering questions live from anyone who tuned in. Before the event started, I was already starting to feel sick. I knew I was coming down with something.

Earlier in the day, I awoke to having absolutely no voice. I started to worry because I love planning everything ahead of time and was already feeling frustrated that the live event would potentially have to get cancelled. My seminary professor was again in my head, whispering to me what he said almost half a decade ago. I posted on Facebook a status update that asked for prayer from the community. I also asked if anyone had some remedies. I received some really good tips.

In the morning, I went to the store and bought what was needed to make the miraculous concoction. By the afternoon, my voice was slowly coming back. About thirty minutes before the event, my voice was back in business. The other problem was that I began to feel really sick.

The moment the live event went on the air, I felt great. I felt like there was not a single ailment that I was experiencing. This feeling accompanied me during the entire live stream. It went on for about two hours. It was a very blessed time with many great questions submitted. Immediately after the live event concluded, I felt an incredible amount of nausea. I have not experienced this for a while. What transpired later was a long painful night of me begging God for mercy and for Him to take away this thorn in my flesh. By God’s grace, I felt much better in the morning. This is again a testimony to the grace that God provides to the people who faithfully want to proclaim His gospel.

I want to close with ten random thought about preaching:

1. Preaching is probably the most exhilarating and the most depressing activity I have ever engaged in.

2. At no point in the sermon can I with full one hundred percent assurance say that someone who is listening has repented of their sin and came to Jesus.

3. The few seconds before I get up to preach — when the worship team is singing their last stanza — I literally feel as if I am on the edge of a cliff or a bridge — about to bungee jump for the first time in my entire life. This feeling has accompanied me every single time I have ever gotten up to preach. I read recently that being nervous before a sermon means that you are actually relying on another power — besides your own — to deliver it. May I never cease to experience this phenomenon.

4. After I preach a sermon, I feel like I got hit by a truck, both physically and literally

5. At times, it is very frustrating to know that 10-20 hours of preparation went into about 30-50 minutes of lackluster words that do not bring about any immediate, tangible and consumable change in the life of a listener.

6. The most rewarding thing that can happen is when people who listen react in some small way. A subtle “amen,” a “nodding of the head in agreement,” a “focused look,” a “reaction” to a minor misspeak so as to offer grace to the speaker — these small items make a world of a difference to the person speaking.

7. Encouragement fuels your tank to get back into the study and continue to pour over the text — this encouragement happens when someone comes up to you and you see that a “light bulb” went off in their mind about a certain biblical truth.

8. Sometimes, a point that was very minor makes a radical change in the life of the listener. After they share this with me, I praise God for it and think to myself: — this literally came to me during the time I was preaching.

9. I learned that people tend to not go ballistic over my pronunciation of greek words or geographical location of a particular epistle.

10. The more I work with and see people who I shepherd during the week, the more effective and the more concretely practical my sermons become on Sunday.

Question: If you regularly speak or preach, what else would you add to this last list of random thoughts? How have you personally experienced the grace of God when you were exceptionally weak?