How Should Christians Approach The Subject Of Suicide 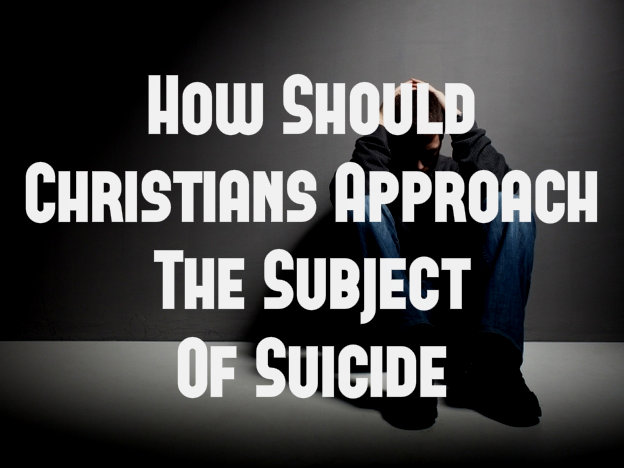 The post that I wrote yesterday, which was titled: What Happens To A Christian If They Commit Suicide, generated an overwhelming response. One thing was clear:

Not only is suicide a serious issue specifically, but also a widely misunderstood issue, generally.

My ultimate goal with this post is to provide a plethora of resources that can be accessed by anyone who would like to find out more about suicide, the reason for it, the possible prevention of it and the only solution to it.

As Christians, we need to know what we believe and why we believe in it. The issue of suicide and mental illness is something that we must understand from a biblical perspective. We must be able to articulate accurately an answer for those who will seek us out to hear the truth.

Please take a look at the resources below, become familiar with them and share them with anyone and everyone you know.

7 Questions About Suicide And Christians

As well-publicized suicides tend to increase the suicide rate quite dramatically, I thought it would be good to address seven of the questions that arise in our minds at times like this

There is nothing in the Bible to indicate that a believer in Christ can ever lose their salvation, their eternal security. The Apostle Paul is clear that there is now therefore no condemnation to those who are in Christ Jesus (Romans 8:1). Paul continues in that chapter to state that nothing can separate us from the love of God in Christ, including death—by any means (Romans 8:28-39).

Do People Who Commit Suicide Automatically Go To Hell?

While I do not believe that all sin is equal in God’s sight, there is no biblical reason to say that there are some sins that destroy the grace of God and need special penance and others that don’t. To say that we cannot have unconfessed sin when we die is problematic in many ways.

What Can The Church Do To Prevent Suicide?

The single biggest thing the church can do to reduce the suicide rate is to admit there is such a thing as mental illness. The second biggest thing we could do is for pastors to admit they need professional help from other disciplines and caring professions to minister to all the complex needs of those suffering such indescribable agonies.

How Churches Can Respond To Mental Illness

As a young believer, I heard so many say that mental illness was just a lack of faith, demonic oppression, or something else. Those can be real issues, but so is mental illness– and they are just not the same thing.

The Asphyxiation Of Hope

I did not know Matthew Warren. I don’t know his father, Rick Warren (at least not personally).  I am very familiar with his ministry. Unfortunately, most of the time I hear about Rick Warren is when someone tries to throw his life and ministry under the bus just to drum up some controversy. I have never joined this crowd in the slightest. Rick Warren’s focus and heart are amazing. What he has done for so many to increase the glory of Christ is beyond measure. His book, The Purpose-Driven Life, is a wonderful book that lit a fire in the hearts of many stagnant Christians.

What If I Am Thinking Of Suicide Myself?

Pastor Steve Bloem gives a number of reasons he has, at times, used to convince himself not to commit suicide.

Here are some resources on battling depression and ministering to those who do (HT to JT):

Question: Will you share this resource post with the people in your life? What steps have you personally taken to educate yourself on this topic? Are you adequately prepared to answer questions about it and serve people who are affected by it?