The Real Reason Rob Bell Took Off His Glasses 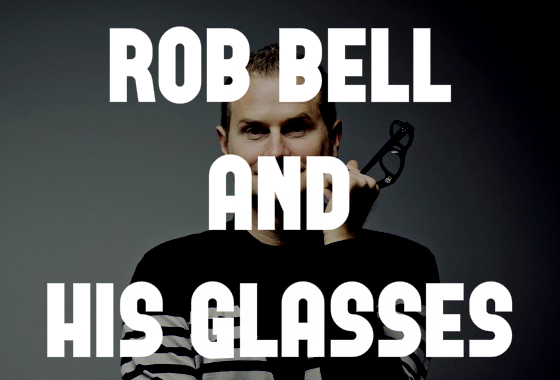 Rob Bell gained notoriety in reformed circles after the infamous “Farewell Rob Bell” tweet, which came from John Piper. This was the leader of New Calvinism bidding adieu the relevant preacher with black-rimmed glasses, from the camp of orthodoxy. After the brouhaha surrounding his book settled down, Bell moves from Michigan to Southern California. In Michigan he was a befallen evangelical leader who has gone astray. In Southern California he became a spiritual seeker in the journey of life. So where did the glasses go in 2013?

If you follow his content, you will clearly see that before 2013, Bell was all about the glasses. You can see them in his infamous Nooma videos. You can see them in the video trailer to his book Love Wins, which put him on (or took him off) the evangelical map, depending on your theology.

But in 2013, they are conspicuously (and intentionally) absent.

People bought the videos not because of the message, but because of the medium. Bell relayed a timeless message in a way in which only he could – focusing on more questions than answers. Providing more mystery than theology. Intentionally catching people off guard rather than giving them a stable anchor.

Rob Bell did what many communicators fail to do.  Bell harnessed the medium at his disposal (video) and broadcasted his message in a bite size format, easily consumable by the insta-gram, you-tube generation. He knows his material, is proficient in the original languages, preaches with barely any notes and uses illustrations in a way in which it becomes impossible not to remember his sermon.

Regardless of what you think of his theology, you cannot take away his incredible communication methodology.

Here are three problems that I see happening when the medium (the way in which a message is communicated) becomes the message (the substance of what is being communicated).

1. Virtual Anonymity. People can hide behind a screen and say things they otherwise would not say face to face. People can email a long treatise defending their position. A treatise that they would never have been able to deliver to you live and in person. People will cancel a meeting or an appointment by a simple text or email. Calling someone creates too much opportunity for conflict or fear. So the medium by which the communication occurs has become the actual message.

The technology we use is starting to use us and shape us.

2. Rebranding Is The New Form Of Being Born Again. Bell became an apostate preacher in his home state. But in his new state, he is a surf-loving seeker, creating a tribe of other like-minded souls.

But what is the real reason for Bell taking off his glasses?

Is it to communicate something?

To tell a narrative

But what is that narrative? Where does it start? And more importantly, where is it headed?

See what I did there?

Removing ones glasses is a cultural sign of honesty and transparency. Think of the time when you were speaking to someone who was wearing glasses. Did they ever take them off at any point during the conversation? At what point did that happen? Was it a moment of deep honesty or transparency? Most likely, it was.

Some attorneys ask their clients to wear glasses into the court room – and at the most opportune moment – take them off, to provide a dramatic effect of integrity and honesty. Did Rob Bell do the same thing? In the position in which he finds himself, this maneuver would work in his favor. He wants to appear more honest, now that he has left the church. Is this the case? Jesus said that you will know them by their fruits (Matt. 7:16).

3. Always Searching But Never Finding. In our culture today it has become cool to search for God but uncool to find Him. Be uncool. A search for truth without finding the truth is no search at all.

The truth is found not inside of us but rather from outside of us.

The truth is found in the Book that was written by God – The Bible.

Question: How do you see that the medium is the message in our culture today? How has this personally impacted the way in which you interact with people?