Are Christians Being Biblical By Boycotting “Bad” Companies ? 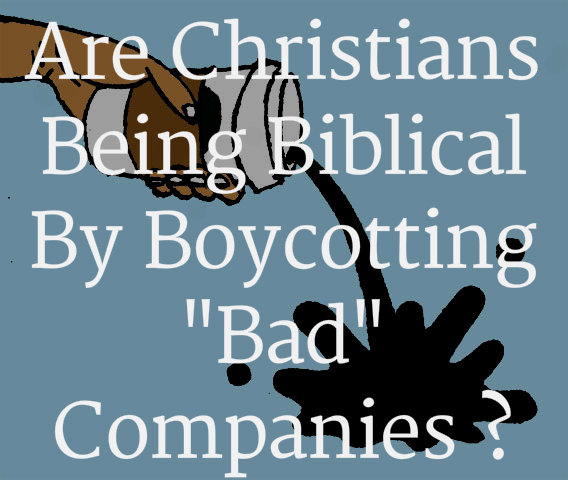 There has been a huge brouhaha brewing over whether followers of Jesus should withdraw their patronage from companies that are not explicitly Christian. Is this a Biblical mandate or a matter of individual conscience? What do we do when companies that we frequent on a daily basis or use their products on the regular – propose or promote an anti-Biblical agenda? I believe that the Bible is very clear about what we should do in this case:

Here is the key passage to apply in this situation:

One person esteems one day as better than another, while another esteems all days alike. Each one should be fully convinced in his own mind. The one who observes the day, observes it in honor of the Lord. The one who eats, eats in honor of the Lord, since he gives thanks to God, while the one who abstains, abstains in honor of the Lord and gives thanks to God. For none of us lives to himself, and none of us dies to himself. For if we live, we live to the Lord, and if we die, we die to the Lord. So then, whether we live or whether we die, we are the Lord’s. For to this end Christ died and lived again, that he might be Lord both of the dead and of the living. Why do you pass judgment on your brother? Or you, why do you despise your brother? For we will all stand before the judgment seat of God; for it is written, “As I live, says the Lord, every knee shall bow to me, and every tongue shall confess to God.” So then each of us will give an account of himself to God. (Romans 14:5-12 ESV)

In another passage, Paul was very clear that they only way to avoid being stained by this world was to leave it completely (1 Cor. 5:9-10).

Boycotting a particular non-Christian company over its policy does not appear to be the direct command of Scripture.

Each person should be “fully convinced in his own mind” knowing that we must “give an account” of ourselves before God – for our actions and for extending or withdrawing “support.”

Here is what I want to say to someone who does not want to “support” a company that is not of a traditional, Christian mindset.

If you are going to boycott a particular company, you must practice what you are proposing.

This means that it will be nearly impossible for you to do the following, without contradicting your stance:

And honestly, boycotting a corporation is bad business that undermines an otherwise bold display of the gospel of Jesus.

I love what Russell Moore had to say about the concept of “boycotting.”

A Roman governor thought Jesus was weak when he refused to use imperial means of resistance. But Jesus’ refusal to fight meant just the opposite of what Pilate assumed. “If my kingdom were of this world, my servants would have been fighting,” Jesus said (Jn. 18:36).

Let others fight Mammon with Mammon. Let’s struggle against principalities and powers with the One thing they fear: a word of faithful witness that doesn’t blink before power, but doesn’t seek to imitate it either.

The Bible teaches us that there are some matters specifically dealing with an individual’s conscience. If you are fully convinced in your mind and are moved by the Holy Spirit to not visit a certain establishment, then more power to you.

But this type of onus cannot be placed upon other people by you personally.

Even worse would be to prescribe this as a Biblical command – which it is most assuredly not.

This is a matter of how we apply to our life that which we read in the Book of Life.

Again — I do not have to agree with you, to be friends with you. Jesus was friends with all kinds of people. You can disagree, agreeably.

Question: What is your stance on boycotting companies that are not explicitly Christian? Is it a Biblical mandate or a matter of the conscience? How can we faithfully display the gospel of Jesus in a marketplace that is often opposed to the clear teaching of Scripture?