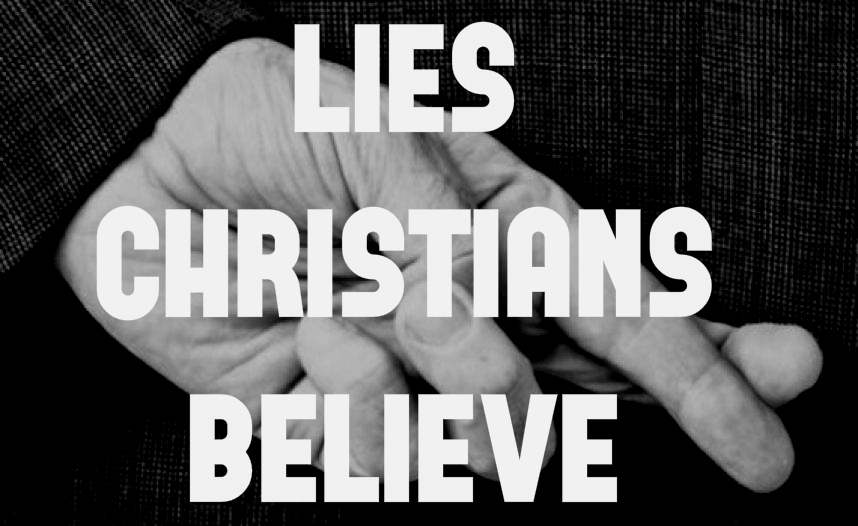 Someone once said that if a lie is told often enough, it will be believed as truth. Unfortunately, this has happened in Christianity. Growing up in the church, you meet a lot of different people who have an interesting way of interpreting the Bible. I believe that many of these lies often came from a folk theology which creates a hybrid of tradition and Scripture, thereby creating a Faux-ology.

Here are five lies that many Christians believe, but should not:

1. The Christian Is Primarily A Sinner. If you confess that Jesus is your Lord, and by grace through faith have believed that Jesus’ sacrifice on the cross was sufficient for you – you are primarily a Saint, not a sinner. Your identity is a child of God.

You will sin but you are set apart from the power of sin.

Instead on focusing on what sin not to do, you continue to focus on the Savior, who saved you from your sin.

2. God Wants People To Get Sick So He Can Teach Them A Lesson. Ultimately, God has never desired for you to be sick. He created everything perfect and initiated a shalom that should not have been disturbed. Why in the world would a Father God want His beloved children to be sick? Will you grow spiritually in light of a sickness? Absolutely! The sickness you have was meant to make you weak, but God will use it to make you strong.

Sickness is a result of sin in this world, not necessarily a sin that you personally committed.

And sometimes, we do not. God does not make us do things contrary to His nature. We do that on our own. So, if I make poor decisions and have to reap the consequences – that is my fault – not God’s.

4. Pastors And Missionaries And Church Leaders Are More Holy. I do believe that when Paul wrote to a young Pastor named Timothy and gave him qualifications of an elder – this was meant specifically to pastors in the church – but in addition to that – this is generally meant for everyone who calls themselves a follower of Jesus. God has provided different people with different gifts. And some gifts should be more desired by us, such as prophecy – so that more people would understand the things of God.

Whether you are a deacon, usher, community group leader, pastor, elder, sunday school teacher, ceo, business owner, mother of six kids, a wife of one husband or a student or an athlete – all of these are called to fulfill the will of God and to serve Jesus with the gifts granted to them.

5. If You Are Not On A Stage In A Church, You Are Not Doing Real Ministry. This particular lie has been very evident in the Russian Church circles. From an early age, kids were ushered on to the stage to say recited poems and sing songs. Young guys who could not even shave yet, were given opportunities to preach. Crowds of youth would also go on stage to sing group songs, etc. All these things are not necessarily bad. In fact, they are actually really good! But what happens is when a good thing, turns into an ultimate thing and inevitably becomes a “god” thing.

The young guy who did not end up going to seminary is now scolded by his parents as to why he did not pursue a higher calling for his life. Why did he settle to go into business or the arts or even entertainment.

It is almost as if the church stage has the monopoly on Christian effectivity.

We have a tragedy going on in the Christian church right now where we started going to church and stopped being the church.

Mothers prefer that their daughters get married to someone who is preaching and going in to full time seminary and ministry. As if other guys who do not have a burden for ministry upon their life, won’t be a lucrative choice for a future spouse.

This is a lie. The church is about unity, not uniformity. People are called to fulfill different roles and usher in others into the same Kingdom where Jesus is King, not the church stage.

As you read this list, my desire is that it de-bunked some myths you had about Christianity. Maybe some of these things have been holding you in bondage for many years.

Today is the day of your liberation.

Jesus wants to set you free from the opinions of people and set you in to His opinion – which is to love Him and to love the people around you – in the specific area in which you are placed and called.

Question: What other lies have you believed in or have been offered? What lies has God shown you not to be true as you progressed in your walk with Jesus?