The Most Important Man In All Human History After Jesus Christ 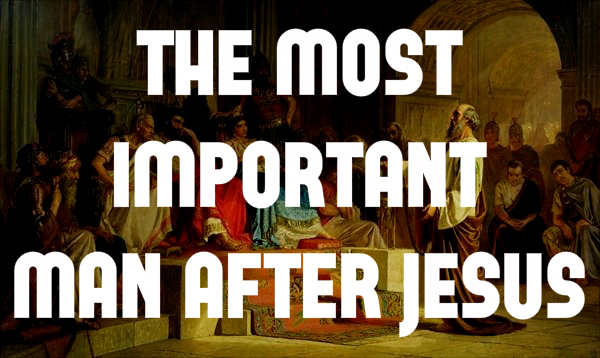 He is one of the most towering figures in all of human history. The great reformer Martin Luther called him “the wisest man after Christ.” The early church father, John Chrysostom said: “Put the whole world on one side of the scale and you will see that the soul of this man outweighs it.” D.A. Carson calls him the second founder of Christianity. By foot, he covered twenty miles daily, across relentless mountain ranges and through swampy wastelands, bringing the message of the murdered but not defeated Messiah. Severely flogged, maliciously stoned and completely broke, he continued to bring a timeless message to a tumultuous world. He was sold out in sending out the message of the gospel to the outer-most parts of the planet. It is of no surprise that the risen Lord called him “my chosen instrument,” and for good reason (Acts 9:15).

The most important man in all human history, after Jesus Christ, was the Apostle Paul.

But this most important man after Jesus was all about bringing the message of Jesus to the watching world. Paul deeply depended on the teaching of Jesus and Paul did preach the same gospel that Jesus preached.

In the history of theology and humanity, there is not a more towering figure than the apostle Paul.

His impact on theology is greater than any other biblical author. Thirteen letters that Paul wrote during his missionary journeys have become a part of the Bible. Paul contributes more to the New Testament more than any other save for Luke, who himself was a disciple of Paul. But more important than the quantity of how much he wrote was the significant impact that he made. All to spread the name and fame of Jesus.

Paul came from an aristocratic Diaspora family, was a Roman citizen by birth, conservatively Jewish in his upbringing and education and was an outstanding young Pharisee at the top of his game. Much more can be said about Paul and his persona. I want to focus today on three things that characterized Paul that should also characterize us:

1. Paul Loved Jesus More Than Life. Paul himself said that to live for him was all about Jesus. To die was all about gaining Jesus. This was the banner under which he ran the race of his life. Everything He did, whether it was working through the night to support his own ministry or preaching by day – he did everything as unto the Lord. For Paul, there was no distinction between the secular and the spiritual. His entire life was a worship session dedicated to the Christ, his most favorite way of referring to Jesus. More than any other biblical author, Paul seeks to establish the salvation history by tying together the entirety of Scripture. Paul emphasized the ultimate significance of Christ and the new covenant ushered in by Christ, in no way undermining or rejecting the old covenant. Jesus himself said that He did not come to abolish the law but to fulfill it. Paul was all about Jesus, in every single sphere of his life – boldly proclaiming the gospel by which he was saved during the Damascus road experience.

2. Paul Loved Scripture And Committed It To Memory. The most powerful tool that you and I can ever possess is memorized Scripture that we can recall at a moment’s notice. Paul was a master of the Old Testament, from which he makes more than one hundred identifiable quotations. In addition, his thirteen letters contain countless allusions and paraphrases to biblical texts. This suggests that Paul was exclusively relying on a well stocked memory. Carrying large Old Testament scrolls would be virtually impossible for an itinerant preacher who’s main transportation were his beautiful gospel-bringing feet. What happens when we do not have our iPhone nearby or no wi-fi to access google. When John Piper infamously interviewed Rick Warren, Pastor Rick quoted fifty Scriptures from memory. How well do we know Scripture? Have we committed Scripture to memory? Most of us can quote immediately from memory John 3:16 or Php. 4:6. But What about John 3:17 or Rom. 12:18? Equally as important texts. I have a challenge for you. Sit down with a pen and some paper. Write down and recite every single Scripture verse that you know, including where it is written. If you are still quoting the same verses that you have been quoting years ago, it is time to refresh your reserve tank. Challenge yourself to memorize at least a verse a week. You never know how powerfully the Holy Spirit will use the verse you memorized, at the most opportune time.

3. Paul Courageously Called All To Imitate Him As He Imitates Christ. Paul purposefully told people to imitate Him, as he imitated Christ (1 Cor. 11:1). Paul ultimately wanted people to imitate the love that God has for people. He wanted people to look at his life and for people to see how much he loved Jesus and people – and he wanted people to imitate him. How many of us are brave enough to say to others today: “Imitate me as I imitate Christ.” If we are not yet bold enough to say that – we need to make sure our life and doctrine have no hint of a dichotomy that would prevent us from proclaiming with Paul this very same message. If we want to boldly call people to repent of their sin, we need to be people who have repented of our sin. If we want to lead with influence, we need to possess authority that did not come from us. It is not enough to know the truth. We must live the truth. I believe that calling people to imitate you like you imitate Christ is not a boastful statement but rather something that you will say after you have went through a deep valley of humility.

Very often, the most painful part of our biography becomes the most powerful part in our testimony. Only then can we stand with Paul and says what he says.

Saul of Tarsus turned The Apostle Paul –  miraculously and scandalously went from killing Christians to creating Christians, from closing churches to planting churches, from persecuting believers to pursuing a creation of believers. This shows us the inestimable nature of God’s grace.

In him we have redemption through his blood, the forgiveness of our trespasses, according to the riches of his grace, which he lavished upon us, in all wisdom and insight making known to us the mystery of his will, according to his purpose, which he set forth in Christ as a plan for the fullness of time, to unite all things in him, things in heaven and things on earth (Eph. 1:7-10).

If the second most important man in all human history was all about the God-man who saves and redeems human history – we do well to imitate him as he imitated Christ.

Question: What example specifically do you take from the life of Apostle Paul. Do you believe that he is the single most important contributor to biblical theology? How are you taking what you learned about him and applying it to your life? What about Paul’s relentless passion spreading the message of Jesus ignites your motivation to do the same?